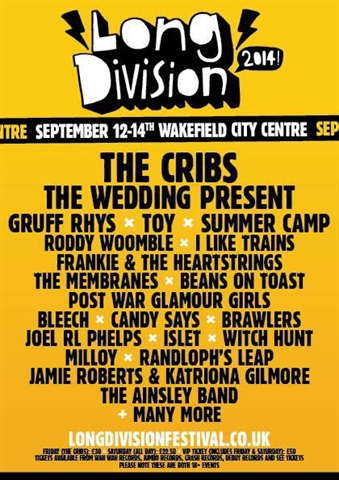 Wakefield will play host to the fourth Long Division Festival between September 12th and 14th. Initially conceived as a way of putting Wakefield under the spotlight by acclaimed local music fanzine Rhubarb Bomb, Long Division has grown remarkably since 2011 and has showcased big names including The Fall, The Wedding Present and Los Campesinos!

Admission to The Cribs gig on Friday is £30, whereas a Saturday all-day pass is £22.50. Alternatively, VIP passes granting access to both Friday and Saturday are available for £50. Sunday’s fringe festival is free apart from a separately ticketed headliner which will be announced in the coming weeks. Admittedly this isn’t the most straightforward ticketing structure, but separately-ticketed headliners ensures that fans won’t be turned away disappointed from headliners despite having a wristband.

One of the things which makes Long Division special is its distinctive venues. The jewel in Long Division’s crown this year is the historic Unity Hall, a derelict Grade-II listed building currently undergoing restoration and only due to reopen the week before the festival. Other confirmed locations include dedicated music venue Warehouse 23, Players Bar and listed building The Orangery.

The festival sticks to its local roots with Leeds contributing three top picks from the rest of the line-up, including a Union Hall slot for Leeds quartet Post War Glamour Girls, riding high on the release of their sublime debut album ‘Pink Fur’ earlier this year and a series of festival appearances this summer. Following their tour supporting Embrace this May, brooding post-rockers I Like Trains can be relied on to deliver a theatrical and dramatic set. Solo instrumentalist Juffage is not to be missed, known for his complex, multi-layered live-looping and collaborations with Katie Harkin and Tom Evans.

Saturday and VIP passes are available online now from See Tickets, Jumbo Records and Crash Records, or in person from Wah Wah Records and Debut Records.