Since the initial announcement back in February that DREAMSCAPE would be reuniting for its 25th birthday celebrations, the fans have been on tenterhooks, eagerly awaiting the announcement of the full line up and main stage acts.

"Since finding out that we had The National Bowl back in mid February it has been all systems go! Not only will this be the best dance music event this year in the UK, it will have been delivered in the shortest time in history I should think!" Laughs Jim Tang.  We were inundated by DJ's and Soundsystems all wanting to play at The Reunion and have over 200 performers now. We have been holding out on the main stage announcements until we knew for certain that we had the right line up to send our Old Skool fans mental on August 16th."

And the announcement has not disappointed. Since the news was leaked today the fans have been going nuts and ticket sales have seen a distinct upturn. This was certainly the news everyone has been waiting for.

"Bringing together the very best in the UK Dance Music Scene such as Whizz Kid, Accelerated Culture, Sidewinder, Dreamscape and Ultra Vegas with Datatransmission under the ESP Promotions umbrella has paid off big time. To say we are looking forward to the event in August is somewhat of an understatement." says Jim.

Jim Tang's brand ESP Promotions has been at the very core of the British underground rave scene since day one.

"ESP Promotions were always the pioneers of the scene and we are resetting the standard of the UK Dance Scene once again with Dreamscape, The Reunion. We know that this is just the start of things to come. Those of us that were there the first time around have never forgotten just how fantastic those days were and how legendary the raves were. This will be a nostalgia trip for the Old Skool and a new experience unlike any they have ever known for the younger generation."

"I am delighted that we have managed to put together a lineup of such relevant, brilliant and legendary headliners that will just make everyone’s day perfect. This will be one summer that we will never forget." Concludes Jim. 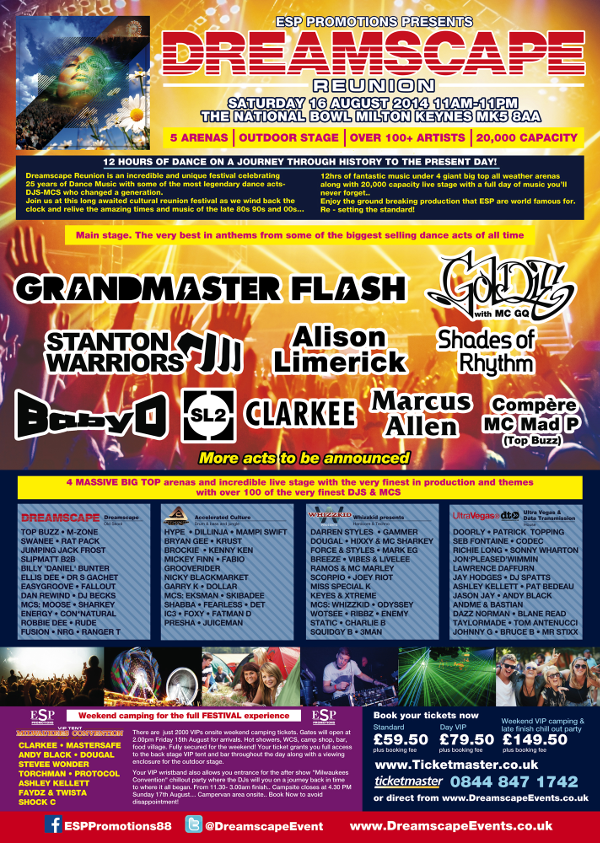