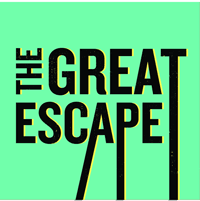 The rapper, whose fifth studio album will be released in June this year, first performed at The Great Escape to a packed crowd in a tiny 200-capacity venue in 2008; Not long after came the release of ‘Wont go Quietly’ which rapidly climbed to the top of the UK charts and established Example as an artist internationally recognised for his signature sound, mixing hip-hop, electro and rave.

Example said of his performance: “A lot has changed for me since I performed at The Great Escape in 2008 in a pub to about 30 people! I played there again in 2011 so it’s a real honour to return a 3rd time and play on the festival’s biggest stage. It's been an amazing journey – playing all the past hits and loads from the unreleased album 5, I will ensure this is a show to remember!”

Kat Morris, Festival Director, added “It is really great to be welcoming Example back to The Great Escape – from playing at one of our venues with a capacity of 200, to touring internationally and achieving two Number 1 Singles, to this year performing at our biggest venue with a capacity of almost 2000, it just goes to show the incredible trajectory of TGE artists go on to take after performing at the festival.”