One of the few early dancehall stars to carve out a consistent, productive career as the genre evolved over the years. His cool-toned, laid-back vocals were perfect for sweet, smooth lovers rock, and gave him a distinct identity.

One of Jamaica's most established singer/songwriters and a true pioneer of the reggae scene since 1962. The Kingston-born star has recorded over 30 albums and is well-known for his lavishly produced ballads.

The Wailing Souls are part of the small surviving group of Reggae and Roots originators still musically active today. 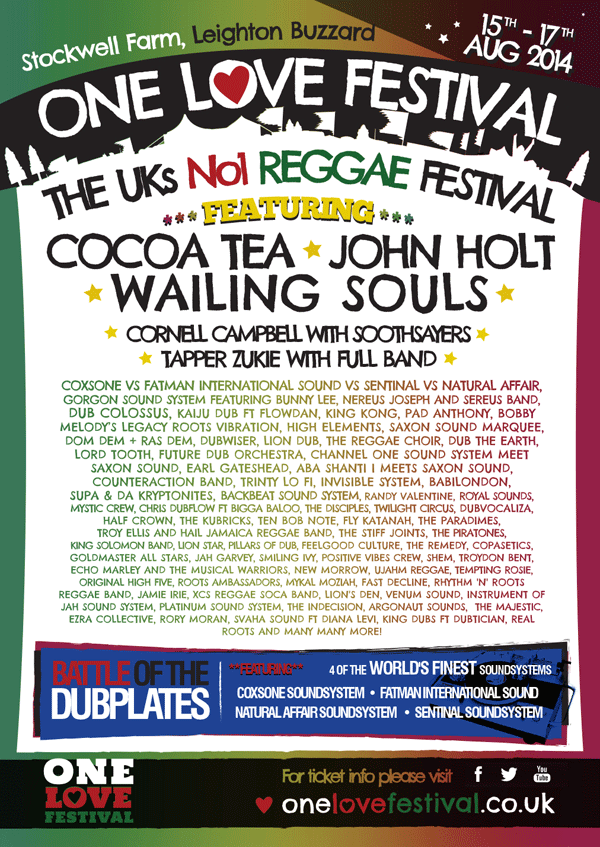 COXSONE SOUND SYSTEM  vs FATMAN INTERNATIONAL SOUND  vs NATURAL AFFAIR  vs SENTINEL SOUND Only YOU can decide who will take home this years Champions Cup 2014.

Cornel Campbell (born 23 November 1945 in Kingston, Jamaica) is a reggae singer, best known for his trademark falsetto voice, and his recordings at Studio One in the late 1960s and his later work with Bunny Lee in the 1970s. After 50+ years in music he is still top of his game and we have pleasure in welcoming him back to One Love Festival 2014

Tappa Zukie  (born David Sinclair, 1955, Kingston, Jamaica) is a reggae deejay and producer and will be performing with his full Band at this year One Love Festival.

One of the most influential and pivotal producers in the history of Jamaica and the history of popular music. With a career spanning over 50 years, his contribution is undeniable: breaking some of reggae’s biggest names, having a literal and metaphorical hand in the creation of dub and pioneering the deejay sound

Singing in a similar style to Tenor Saw over early digitals riddims. In the mid 80&primes, Kong recorded for several of Jamaica’s top producers, including Prince Jammy, Black Scorpio

2014 holds many plans for Nereus, he has now produced four new albumsl. Even after achieving such high levels of success that most artists would be satisfied with, Nereus remains humble and committed to recording quality music. Blessed love. & Guidance.

Full Line up to date: