First up, Polish death metal legends DECAPITATED. This will be the band’s first appearance at BLOODSTOCK! Decapitated are hard at work on their as-yet-untitled sixth studio album, set for release in 2014 via Nuclear Blast. Decapitated excitedly declared, "Bloodstock, here we come!!! Finally, after many years, it's time to play at one of the biggest metal festivals in the UK. Can't fucking wait! It's an honour to perform on the Bloodstock stage for so many people. Hopefully we will kick your asses with our new album! See you soon!" Not familiar with the band yet? Check out the title track from their last record, ‘Carnival is Forever’ at: http://www.youtube.com/watch?v=m1Wpo8j1Ta0 and then stay up to date with the band on Facebook at: http://www.facebook.com/decapitated.

Joining them, BLOODSTOCK luminaries SAXON will be returning to the festival in 2014! The legendary British metalheads released their twentieth album ‘Sacrifice’ in February, via UDR, featuring stunning cover art from BLOODSTOCK founder and fantasy artist Paul Raymond Gregory. Watch the video for the album’s title track at: http://www.youtube.com/watch?v=8d_6BkhKPAk. In November, the band will release ‘Unplugged And Strung Up’, a 14-track collection of alternative takes on classic SAXON tracks. Get full details at: http://www.saxon747.com. 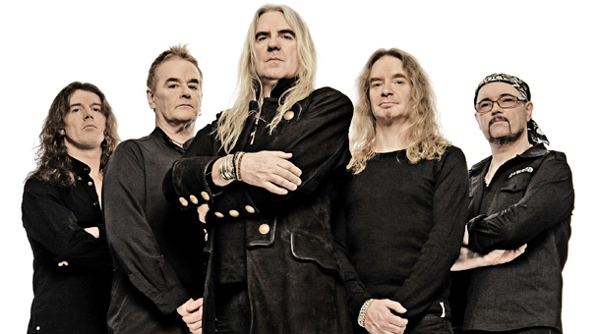 All hail! US thrash metal icons FLOTSAM & JETSAM will also appear at BLOODSTOCK 2014! Did you know? The band’s 1986 debut album (which featured Jason Newsted) was awarded an impressive 6K score by Kerrang! magazine, the first in Kerrang!’s history. The band are currently working with Pledge Music on a full remake of their classic second album ‘No Place For Disgrace’. To pledge and for regular updates, including preview video clips from the studio, visit: http://www.pledgemusic.com/projects/npfd. FLOTSAM & JETSAM are also touring in support of latest, eleventh studio album ‘Ugly Noise’. Keep tabs on the band at: http://www.facebook.com/flotsamandjetsam.official and http://www.flotsam-and-jetsam.com/.

Tickets for 2014's event are already on sale at ‘early bird’ prices, a bargainous £115 for a 4-day weekend ticket with camping.  Don't delay, as once the limited ‘early bird’ allocation is gone, it's gone, and tickets revert to full price.  Pick up your discounted tickets now at http://bloodstock.seetickets.com/.

This year, over 1.2 million fans from across the world logged on to watch the bands on the BLOODSTOCK main stage, via the Daily Motion live link.  2013 was BLOODSTOCK’s biggest ever attendance at just shy of 14,000 and with a site licence of 15,000 we are expecting the 2014 event to sell out in advance, so don’t wait too long to get your tickets!

Already announced as Friday night bill toppers are New Orleans sludgemeisters DOWN. Joining them to headline Saturday night are black metal overlords, EMPEROR.  BLOODSTOCK will be the only UK performances for both bands.