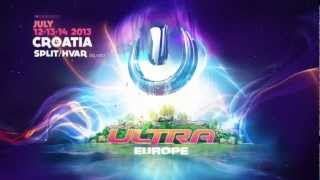 ULTRA WORLDWIDE has announced a further SEVEN acts set to perform at the inaugural edition of ULTRA EUROPE, due to take place from July 12th – 14th this summer in the Croatian city of Split and on the stunning nearby island of Hvar!

These seven are amongst the finest electronic artists to be found anywhere on the planet and will be joining already confirmed headliners such as Avicii, Armin Van Buuren and Carl Cox and further dance heavyweights including Afrojack, Chase & Status, Porter Robinson, Hardwell and many more!
Canadian bass purveyors Adventure Club, Russian duo Hard Rock Sofa, London’s Jon Rundell and Dutch house music mainstays Sunnery James & Ryan Marciano will all be coming to enthrall fans at the Poljud Stadium, Split on Friday 12th July, with the next day seeing W&W from the Netherlands – one of the most exciting trance acts around – and Spanish wonderkid Danny Avila performing on the second day in the city of Split. Encompassing almost everything from dubstep to trance via techno, electro and progressive house, these new additions further add to the wonderfully diverse array of music that will be on display, offering up something for every festival attendee and reinforcing Ultra’s unending commitment to provide only the best and most forward thinking lineups at each of their events worldwide.
When the festival moves to the beautiful island of Hvar and the 5 star Hotel Amfora Grand Beach resort for its 5,000 person exclusive pool party on 14th July, the up-and-coming Miami trio of Brass Knuckles will now also be sitting alongside Steve Aoki, Erick Morillo, Dada Life and Nervo on Sunday’s line up next to the infinity pools and cascading waterfalls of this super luxurious setting.
Tickets for the third day of Ultra Europe sold out after being on sale for just 10 minutes, however combo tickets for the first two days at the Poljud Stadium in Split are still on offer. General admission tickets are available for the incredible price of €60 – set to rise to €75 on 7th June – while VIP packages start range from €100 – €500. For more information on tickets and accommodation go to www.ultraeurope.com or www.travel2ultra.com, and for all the latest Ultra Europe updates be sure to head over to the Official Facebook page.
FacebookTweet