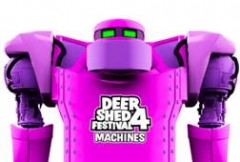 Having announced the bulk of the music, comedy and arts programmes for Deer Shed Festival 4, now’s the time to focus on the other activities and adventures taking place, along with a few additional acts including CBBC’s Big Howard Little Howard, the return of the Beer Festival and exciting new partnerships with Sunderland City Council and legendary toy company, Meccano. With the music headliners consisting of Edwyn Collins, House of Love, Darwin Deez and Gaz Coombs, a whopping PG rated comedy line-up, cinema showcases and an extensive arts programme; Deer Shed Festival provides a fully immersive and interactive holiday for the whole family to enjoy together in a beautiful site, set to the soundtrack of top quality music.

New for the Big Top Comedy tent are the award winning Big Howard Little Howard, stars of CBBC's Little Howard’s Big Question, The Royal Variety Performance and The Tonight Show with Jay Leno, will be hosting and evening of variety and stand up in The Deer Shed Big Top. Expect a joyful mix of wonderful stand up and variety as Big Howard and his animated partner in mirth Little Howard introduce the uber daft Duncan Oakley (world travelled comedian, musician, actor and one man band from Radio 4's 'Shappi Talk'), Steve Best (brilliant visual comedian from BBC1's 'The Stand Up Show' and Baddiel and Skinner Unplanned' ITV1) and Justin Moorhouse (from the seminal Phoenix Nights C4, 8 out of 10 Cats C4 and his own stand up special on Dave). Music, variety, stand up and live animation to truly tickle the funny bone and ease away a hard day of festival going, and all PG rated! For more info on Big Howard Little Howard have a look at their Royal Variety performance here: http://www.youtube.com/watch?v=bngu7p0_gks

Late comers on music line up are Velcro Hooks, a raw four piece, garage rock band from Bristol that will be bringing their now notorious full on, in your face explosion of pure rock in their live show.

Tickets for Deer Shed Festival are available from just £89 (plus BF), with the child (6-15) tickets coming in at a supremely reasonable £25. http://www.deershedfestival.com/tickets/