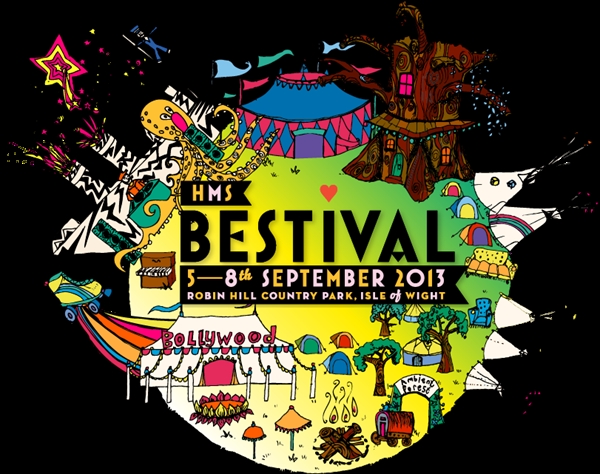 With the recent news that Bestival's Friday headliner will be party starter extraordinaire Fatboy Slim playing a very special Bestival Birthday Bash set, the triumvirate of amazing must-see headliners is complete as he joins the previously announced Elton John and Snoop Dogg. And now, Bestival HQ’s attention turn to adding yet more incredible new live music and DJs to the mammoth line-up. Scooping the Best Major Festival award last year yet retaining our boutique sensibilities, Bestival’s spectacular 10th birthday this September 5th-8th is going to be the greatest show on earth with more fun per square metre than you’ll find anywhere else; it’s absolutely unmissable!

Rob da Bank says: “HMS Bestival is well and truly under way, steaming across the high seas picking up even more musical passengers. Crystal fighters are Bestival stalwarts and about to go stratospheric, Jon Hopkins has made one of the electronic albums of the year and no party is a Bestival party without Hudson Mohawke and The Correspondents…all aboard you crazy landlubbers!

Crystal Fighters are among the latest litany of vital new acts that are getting us all hot under the collar. With one of the most incredible and visceral live shows around they’re a truly mind-blowing experience that you'd be mad to miss. With their second album Cave Rave out this week, the band are fully charged and ready to rain down their unique brand of mayhem on the Bestival crowd, making our 10th birthday bash that bit more special.

Keeping your feet moving long into the night will be an array of on-point selectors including Hudson Mohawke whose production prowess is so in demand he’s currently rubbing shoulders with the likes of Kayne West. An undoubted wonky genius who channels a seemingly endless array of goodtime grooves from hip-hop, dub, future RnB, downright dirty funk and beyond into a seamless dancefloor decimating spectacle, Hudson is working on the follow up to his acclaimed Butter long-player and we can't wait to see what wild new alloy of sounds he has in store for us.

Finally, we’re very sorry to say that The Child Of Lov has cancelled all of his summer dates, so he won’t be joining us at Bestival as previously announced. Never fear, however, there’s still a truckload of ace stuff happening across the weekend, so hopefully no one will be too put out!

(For full-time students only. Valid NUS or ISIC ID required at the box office. No other student ID accepted)