Home > Festivals > The Smashing Pumpkins set for Poland’s Off Festival

OFF are proud to announce that the legendary American band Smashing Pumpkins will be one of the headlining acts at this year's OFF Festival. But they're not the only reason to come to Katowice this summer: get a taste of Brutal Truth's merciless deathgrind, Austra's captivating electro sounds, the raw rock power of Japandroids, and revisit the 90s with a performance of Molesta Ewenement's debut album. All this and more, only at the OFF Festival!

The Smashing Pumpkins
Rarely can a 90s band still surprise audiences and offer something more than just a rehash of their former glory. Led by the charismatic Billy Corgan, the Smashing Pumpkins continue to explore their art, most recently with the epic, dark Oceania, released in 2012. But this American band's OFF Festival set is sure to feature trips down memory lane to songs off of Siamese Dream and Adore, to the bittersweet melancholy known only to those who have tasted Chicago's very own Pumpkins. We just can't wait. 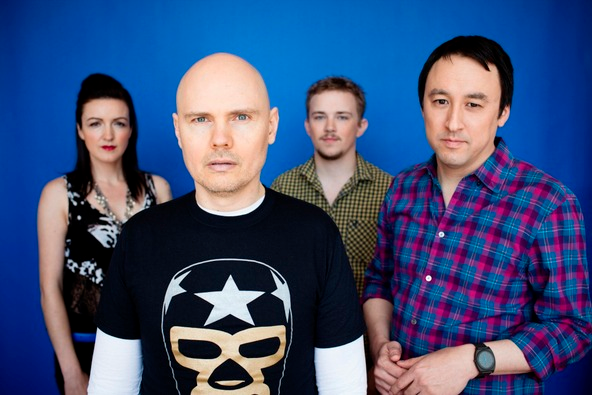 Austra
There's a magical moment at every Austra concert when Katie Stelmanis, the Canadian group's lead vocalist, reveals the true might of her classically-trained voice, and the visualizations behind the musicians depict falling stars, as if it were her knocking them down with her singing… Austra is an exceptional act, one that combines just the right proportions of gothic coldness and dance potential. The group's second album, Olympia, the follow-up to Austra's universally acclaimed Feel It Break, is slated for release before their summer appearance at the OFF Festival.

Molesta Ewenement performs Skandal
Produced by DJ 600V under Molesta Ewenement's early name, Mistic Molesta, the 1998 album Skandal is one of the cornerstones of Polish hip-hop. "Wiedzialem, ze tak bedzie," "Sie zyje," "Osiedlowe akcje" – every track on the album has since become a classic. We're proud to announce that Vienio, Wlodi, and Pelson will be going back in time to perform Skandal in its entirety at the OFF Festival.

Mikal Cronin
Mikal Cronin first appeared at the OFF Festival as a member of Ty Segall's band. Now it's time for a solo performance by a guy who's growing up to be one of the most influential Californian songwriters of the younger generation. His sophomore album, MCII, set for release in late May, proves that while Cronin hasn't forgotten how to distort his guitar, he has come a long from the dirty psychedelic sounds of his earlier days; the record is a collection of excellent, captivating tracks that are just perfect for live performances.

Brutal Truth
Extreme conditions demand extreme responses: Brutal Truth's artistic motto also happens to be the title of their 1992 debut album. Founded by bass player Dan Lilker (known for his work with the first incarnation of Anthrax as well as such acts as Nuclear Assault and S.O.D.), the band has achieved the impossible by shifting the boundaries of extreme music beyond even the most radical forms of death metal and grindcore towards the avant-garde. They recently even collaborated with Robert Piotrowicz, a leading figure in the world of Polish contemporary music. Brutal Truth's last album to date is 2011's End Time, but it's clear that the band has not yet had the last word.

Japandroids
A Canadian duo – guitar, drums, and two screaming mouths – who make enough noise for five people. Brian King and David Prowse have been putting their whole hearts into restoring the credibility of pure-blooded rock with a massive sound and catchy riffs since 2006. Last year they came out with Celebration Rock, one of those rare albums that gets appreciated at the offices of Rolling Stone as well as Pitchfork. And just wait till you see Japandroids live!

Woods
Woods may be from Brooklyn, but their folk-rocky, slightly psychedelic and often catchy songs sound like they have more in common with the Californian music scene. The band has been astoundingly prolific since they started in 2006, releasing no less than five albums (2012 Bend Beyond being the last to date) and a stack of EPs, and performing innumerable energetic live shows that captivate audiences with a flower-power rock vibe for our times.

Nite Jewel and Peanut Butter Wolf perform Kraftwerk's Computer World Computer
World is the eighth album by the German act Kraftwerk, released in May 1981 and now considered to be the peak achievement of this remarkable group. Nite Jewel, a.k.a. Ramona Gonzalez, is an artist from Los Angeles with a penchant for pop and funk who keeps her ear to the ground in the world of lo-fi. Peanut Butter Wolf, or Chris Manak, is a DJ, hip-hop producer, and founder of the cult label Stones Throw Records. How does all of this fit together? We can't wait to find out ourselves.

Fatima Al Qadiri
Born in Senegal, raised in Kuwait, and currently residing in Brooklyn, Fatima Al Qadiri is an artist whose unclassifiable work combines Middle Eastern melodies with sounds sampled from first-person shooters. Her latest EP, titled Desert Strike, caused quite a stir in the avant-garde fringes of the electronic music world, but Fatima, a.k.a. Ayshay, also shocks and inspires audiences in other media. She is also a visual artist (with shows at the MoMA and the Tate Modern), a performer, curator, and journalist: an exceptional individual whose performance is sure to leave an indelible impression.

Drekoty
One of the most original debuts on the Polish music scene in recent years. The band was founded by drummer and pianist Ola Rzepka, known for her work with Alte Zachen, Pogodno, The Complainer, and Pictorial Candy, with Magda Turtaj (vocals, keyboards) and Zosz Chabiera (vocals). They recently released their debut record Persentyna, which has won widespread praise and yet defies all attempts to find an apt description. We're not even going to try – just come and see the show. It's going to be as hysterical as it is lyrical, in a way that only Drekoty can pull off.

Magnificent Muttley
Krzysztof Pozarowski (vocals, bass), Jakub Jusinski (guitar, vocals), and Aleksander Ortowski (drums, vocals) make up a classic power trio that runs its old-school rock sounds on the fuel of youth and enthusiasm. Jaw-crushing riffs may be their strong side, but they can also write, and their eponymous debut – a regular on most of Poland's 2012 year end lists – is full of excellent tracks. Winners of the Jarocin Festival competition and the Adam Mickiewicz Institute's "Border Breaker" prize for the band with the best shot at an international career.

Nathalie And The Loners
Natalia Fiedorczuk is a woman of many talents. She sings in Happy Pills, writes a column for T-Mobile Music, and composes music for plays at the Powszechny Theater in Warsaw – and that's just the tip of the iceberg. Her permanent place is at the helm of the project known as Nathalie And The Loners, whose second album, On Being Sane (In Insane Places), was released in November 2012. This hypnotic, beautiful, and complex record features performances by Maciej Cieslak (Scianka, Lenny Valentino), Jerzy Rogiewicz (Levity), and Karolina Rec (Scianka, Cieslak i Ksi?zniczki). We're very curious to see how Natalia's intimate songs come across on the OFF Festival stage.

Rebeka
You have to be pretty bold to title your debut single "Fail," but this Poznan-based duo has nothing to worry about: their tracks are dancefloor bombshells, and their upcoming album on Brennnessel Records is one of the most anticipated releases on the local alternative dance music scene. If the name of the label sounds familiar, it's because Rebeka's production wing – Bartosz Szczesny – also mans the bass guitar in Kamp!. The face, founder, and voice of the project, however, is Iwona Skwarek. Oh, and one more thing: "Stars" is their better-known single, and the one with the more appropriate title.