It’s been over three years since 2009’s ‘Rebuilt By Humans’ and in that time he’s toured the world, started a family (he has a one year old son, Beau Henry Faulkner-Richards) and some might say helped usher in a new generation of singer-songwriters. Ed Sheeran, Ben Howard and Michael Kiwanuka might be stylistically diverse, but their ‘have-guitar-will-travel’ approach surely flows from the trailblazing example of Newton. 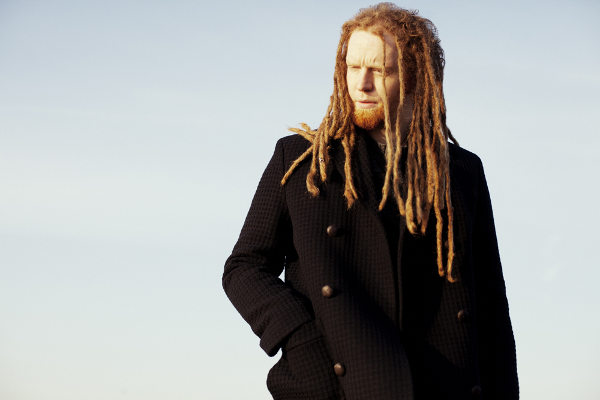 Now, after invention, innovation, reinvention and creation, comes his third album, Write It On Your Skin. This one man band (in every sense) has opened himself up to the talents of other writers and players working with his brother Toby (a former drum and bass MC), hip hop fan Sam Farrar (Phantom Planet) and production writing pair Nexus.

The result? An album bristling with spontaneity, the best kind of DIY imagination, and songs from unlikely sources but with a very likely-lad appeal.

He is the feelgood man of the season, the summertime troubadour who brings singalong vibes. As he says now with a laugh, despite his trademark rust-red dreads, he only seems to get recognized when it’s sunny outdoors:

“For some reason if it’s raining it can’t be me – but if the sun’s shining, then it’s definitely me! I’m completely affiliated with the sun. I get that now.”

Newton has previously sold over 1million albums in the UK alone. His debut ‘Hands Built By Robots’ spent over 10 months inside the Top 40 Album Charts and become one of the Top 20 Biggest Selling UK digital albums of all time.

Check out the Album sampler below:

Get your tickets now: