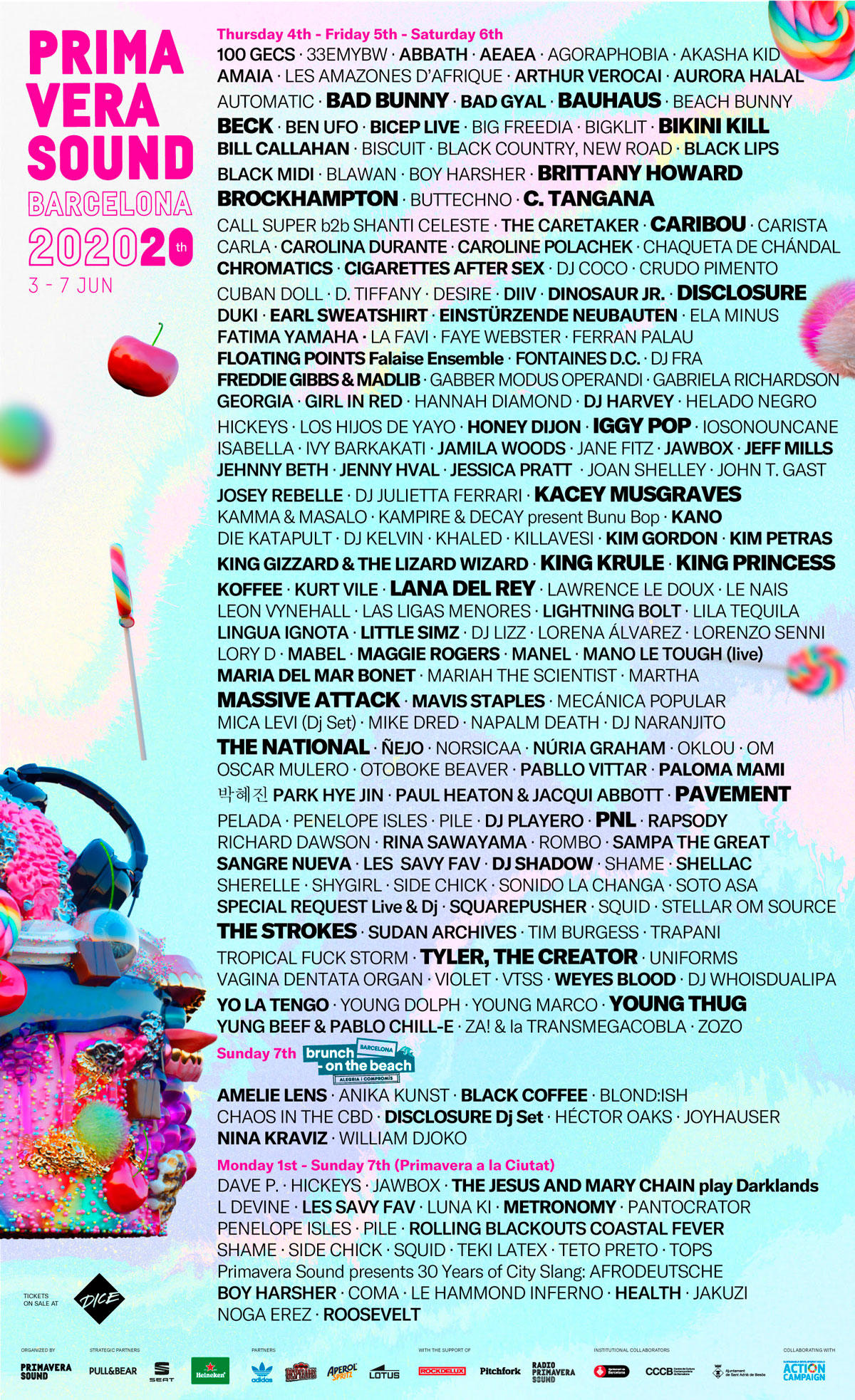 211 artists of 35 nationalities form a lineup that more than ever looks back as well as looking forward, with as much passion as on the first day. Every one of Primavera Sound lineups has been a snapshot of the music of its time. So the lineup of the 20th anniversary of the Barcelona festival had to be a snapshot of all of that time, a party that would reflect the identity that had been built over the years with the same enthusiasm with which we started 20 years ago. The enthusiasm we know we share with all of you. All those Primavera Sounds that you can remember, and all of those you can imagine, are represented this year. From #bestfestivalever to #bestfestivalforever.

Porto will host the eighth edition of NOS Primavera Sound between 6 and 8 June and it will do it with the same philosophy which inspired the revolutionary line-up for Primavera Sound Barcelona. R&B and soul divas Solange and Erykah Badu and Colombian J Balvin head up an egalitarian and eclectic programming which reflects the times we live in with the boldness and stylistic diversity which highlight today’s music.

A total of 70 names will come through the emblematic Parque da Cidade. Solange, J Balvin and Erykah Badu will be accompanied by the artist of the moment Rosalía, by Interpol, on excellent form, and by the celebrated return to the stage by Stereolab. Beside them will also be Courtney Barnett, James Blake showcasing his new work, the new scenic show by the illustrious Jarvis Cocker, Danny Brown and Kate Tempest’s mutant hip hop, the Brazilian popular music legend Jorge Ben Jor and the electronic apotheosis of two-piece Modeselektor in a live format, as well as techno goddess Nina Kraviz. American indie rock idols Guided By Voices, the voices of future electronic pop Mura Masa and Yaeji and the guitar ecstasy by “our” Shellac undersign a line-up which looks to the present and the future without forgetting the past.

As usual, the best albums of the season for the specialised critics will be heard at NOS Primavera Sound. Besides El Mal Querer from Rosalía and Vibras from J Balvin the new expression of indie rock by youthful Snail Mail will alternate with veteran Low, who signed with Double Negative a creative summits in its long career. The pop wanderings of experimentalists Yves Tumor (with Safe In The Hands of Love) and SOPHIE (with Oil Of Every Pearl’s Un-Sides) share the line-up with Kali Uchi’s revered R&B, the new adventure by Neneh Cherry and also the new classicism of Lucy Dacus.

There is a lot more: this year, more than ever NOS Primavera Sound will have something for everyone. It’s always advisable to read beyond the headlines and find all the hidden treasures in the Parque da Cidade. Gems such as Big Thief’s magnetic folk, Tirzah’s synthetic dreams, the improvisation apotheosis by Sons of Kemet XL, the intersection of styles of the Estonian Tommy Cash, Lizzo’s frantic swag, Men I Trust, Miya Folick and Aldous Harding’s wanderings, the slaps such as JPEGMAFIA in hip hop, Amyl and the Sniffers in punk, Fucked Up in hardcore and why not, Nubya Garcia in jazz. From indie with Hop Along, to more soul and jazz versions with Nilüfer Yanya or the more intimate side with Tomberlin. From the post-rock mix of Jambinai, to the post-punk by V**gra Boys; from R&B touches in MorMor and to synth pop by Let’s Eat Grandma and the alternative rock by trio O Terno, it’s merely a question of seeking out the festival each one dreams of. Icons of yesterday such as indie pioneer Liz Phair, of today such as transgressive Mykki Blanco or of tomorrow like Ama Lou.

Those who need electronica can settle down: the procession of beats arrives, led by Modeselektor (with a new album in tow) and Nina Kraviz, and it is complete with a grace-filled Peggy Gou, the unstoppable Courtesy and Helena Hauff and the head-on attack on the dance floor done by Joy Orbison, Roza Terenzi, Boddika and Job Jobse. Names such as David August, Dr. Rubinstein, Jasss and Mad Miran are also part of the offerings for all those who want to surrender to the power of dance.

The Portuguese presence this year will be marked by Dino D’Santiago’s global vision, the daring hip hop by the national legend who is Allen Hallowen and the meeting of generations resulting of the reunion of Lena d’Água and Primeira Dama with Banda Xita. To these is added the alternative vision of Surma, ProfJam’s expert rap, the fresh electronic of Mai Kino and the power of dance music in the feminine form with Jackie and Violet, known from Rádio Quântica which she founded with Photonz, also in the line-up. A diverse sample which proves that whatever the genre, there are home grown heavyweight representatives.

Meanwhile, besides Rosalía, NOS Primavera Sound will be the ideal place to discover the charms of Christina Rosenvinge, recently awarded the National Prize for contemporary Music in Spain, as well as the post-hardcore of cult Basque band Lisabö.