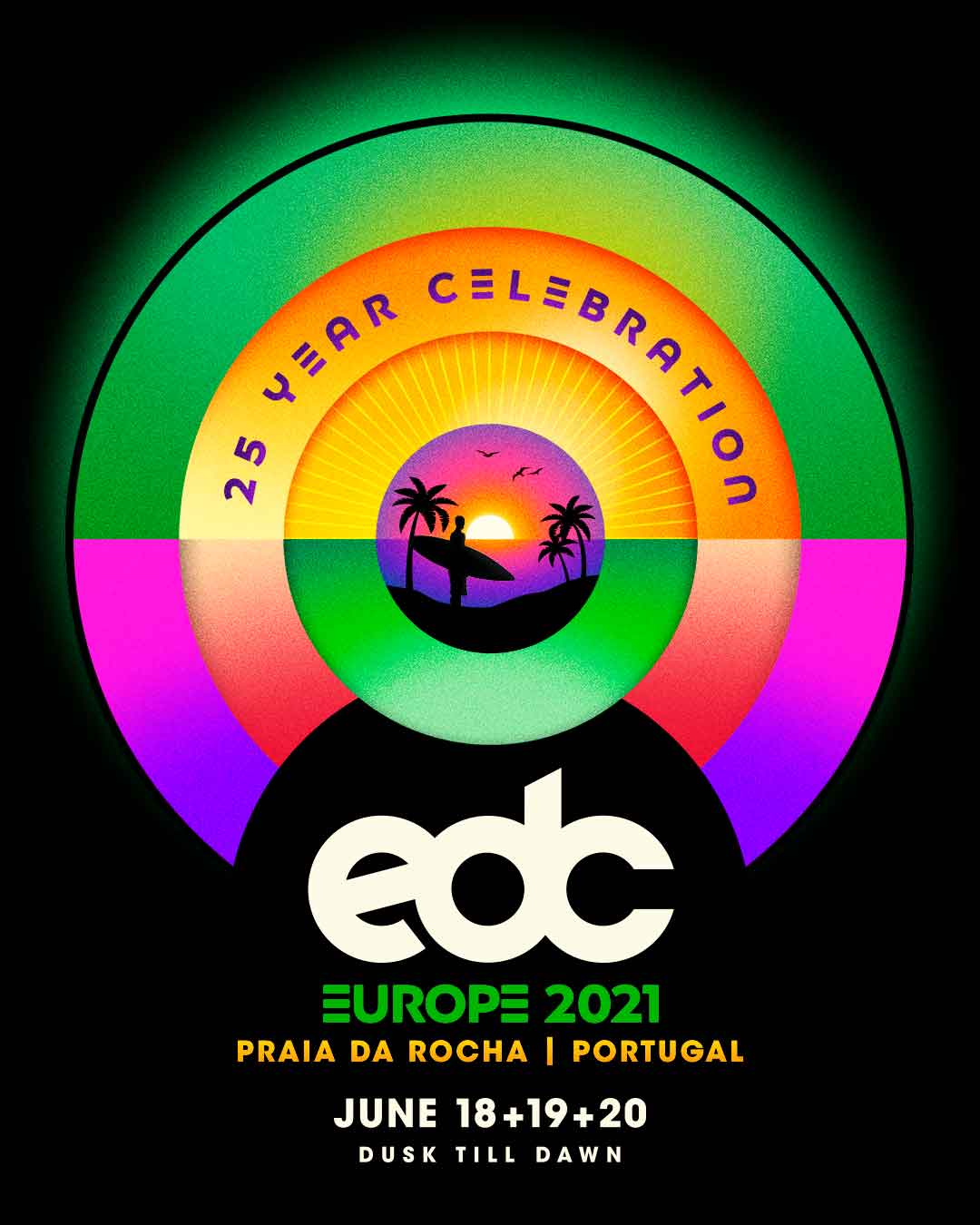 Over the past quarter of a century, EDC’s stellar line-ups, jaw-dropping production and the unparallelled sense of community it encapsulates has cemented its reputation as an unmissable offering in the dance music calendar. Taking place in a host of extraordinary locations around the world, year after year EDC delivers cutting edge line-ups showcasing the electronic music spectrum, becoming the trusted destination to see the very best. With 2020’s iterations leaving a summer without huge EDC moments, the much anticipated return to European shores for EDC Europe 2021 promises an antidote to a missed year of festivals as a joyous celebration of life, love, art and music under the electric sky.

The Best In Festival Main Stage Moments
An unbeatable lineup of EDC greats head to Praia De Rocha beach next summer for emphatic Main Stage moments on EDC’s kineticFIELD that are sure to define summer 2021. Packed with the names that have taken electronic music to the biggest stages on the planet, changed the game and produced some of the most talked-about landmark shows in modern music history, EDC Europe brings them all together for something truly special. Whether it’s the iconic Tiesto, Eric Prydz and Armin Van Buuren or global heavyweights Marshmello, Alesso, Dimitri Vegas & Like Mike, DJ Snake, Don Diablo and Diplo to name but a few – it’s the perfect invite list to celebrate 25 years of EDC in pure technicolour fashion.

The Best In House
Rich in depth with an almost never-ending roll call of the best in the world and setting the mood on EDC’s kineticFIELD stage, glorious house energy radiates from EDC Europe 2021. Gorgon City mixes up a storm, Nora En Pure and Sonny Fodera take the beaches of Portugal by storm, Manchester club leaders Solardo get set for a summer memory, and Hannah Wants goes B2B with Sam Divine as all and more turn EDC Europe into their own personal playgrounds come June 2021.

The Best In Techno
Reaching across the electronic music spectrum and taking over EDC’s neonGARDEN and cosmicBEACH stages, EDC Europe welcomes a vast mix of incredible names from around the world to The Algarve’s picturesque beach location. The very best in Techno are primed for huge moments under the stunning Electric Sky with the likes of Charlotte De Witte, Richie Hawtin, Camelphat, Jamie Jones, Michael Bibi, Patrick Topping, Sven Vath, Maceo Plex and a very special Adam Beyer Presents Drumcode show just a sample of the mammoth names confirmed already. With something for everyone, there hasn’t been an electronic lineup quite like it.

The Best In Bass
Embracing the pioneering sounds European club culture has laid the groundwork for across the globe, EDC Europe welcomes an unrivalled range of bassline favourites from across the continent and beyond on its bassPOD stage. Iconic festival titans Chase & Status (DJ Set) and Andy C lead the way for a bill that at any other festival would command the main stage. From Sigma (DJ Set), Holy Goof, DJ Fresh and Shy FX to Sub Focus (DJ Set), Kings Of The Rollers, Netsky, Dimension (DJ Set), SASASAS, Wilkinson (DJ Set) and many more all confirmed – bassline is ready to tear up Electric Daisy Carnival in a way it’s never done before. The hugely influential Hardstyle sound will also be celebrated at EDC Europe 2021 on its wasteLAND stage, with pioneers and renowned faces such as Headhunterz, Da Tweekaz, Brennan Heart, Wildstylez, and more set to touch down. It all adds to a festival experience that can’t be touched in 2021 and beyond.