St. Georges Hall has been transformed for tonight's event, the statues and pillars are hidden away with black curtains, the beautiful tiled floor is covered in artificial grass, and with the white picket fences in front of the stage, it has the feel of a rural village fete.  Material is draped above the audience and glows with the magenta coloured lights. The wonderful original architecture and decor of the ceilings and stain glass just peak through.

Steve Levine was commissioned by Liverpool International Music Festival (LIMF) to produce this collaborative event, hand picking performers, including artists he's produced, Boy George and Natalie McCool, along with Mark King, Bernard Butler, Tim Burgess, Hollie Cook and Mary Epworth. Each would perform a mini set backed by the others, with the night being finished off with a headline set from Boy George.

First up was Level 42's Mark King who opted to go with a cover of the Cream song 'Sunshine of your Love' and didn't leave the mixed audience disappointed with the pensioners rocking along with skinny jeaned teens.

Natalie McCool, Liverpool Music Awards' female artist of the year and possibly the hardest working live performer on the local circuit was next, performing 'Thin Air', an obvious choice for tonight as Bernard Butler supplied additional guitar on the track from her brilliant debut album. Bernard and Natalie were then left alone on stage to perform a track he produced and co-wrote for Duffy, 'Syrup & Honey' was one of the highlights of the night and showed just what a great vocalist Natalie McCool is.

If the audience were happy with what they had seen so far then they were about to be blown away with a full on onslaught of stomping Rock from Mary Epworth performing another of the nights highlights 'Black Doe' with the addition of almost every performer along with a horn section.

Hollie Cook certainly has a good musical pedigree, her Mother being Culture Club vocalist Jeni Cook, her Father Paul Cook, was the drummer in that little punk band The Sex Pistols and her Godfather is none other than tonight's headliner. Following a stint doing backing vocals for the reformed Slits in the late 2000's, Cook went on to release her tropical pop sounding debut in 2011 and released her second album using PledgeMusic this year. Her performance tonight is a little change from the rest of the acts, infusing her unique blend of reggae and pop to great effect on tracks such as 'Postman'.

By the time Tim Burgess hit the stage the audience had already been treated to what felt like a real celebration of music both old and new. With his blonde bowl cut almost covering his eyes his 4 song set list was stripped down, acoustic and laid back which was slightly disappointing at this stage of the night, although it was well executed and probably more suited to this one off event. 'The Only One I Know' being the stand out track.

Following a short interval it was Boy George's time to step into the limelight for his headline slot. If the set list was picked to please an indifferent festival crowd then he certainly achieved it. Mixing old solo tracks with a few Culture Club bangers, along with his newest solo tracks such as 'My Star' and even classic rock covers in the form of 'Knockin' on Heaven's Door' and T.Rex's 'Bang a Gong' a song he recently collaborated on with The Black Lips. He never left out the obvious, if you could pick one of your favourite Boy George songs then it probably made an appearance, whether it be 'Hare Krishna', 'Karma Chameleon' or 'Everything I Own'. Boy George kept the crowd thoroughly entertained throughout, ending by inviting the rest of the performers on stage for a final bow. 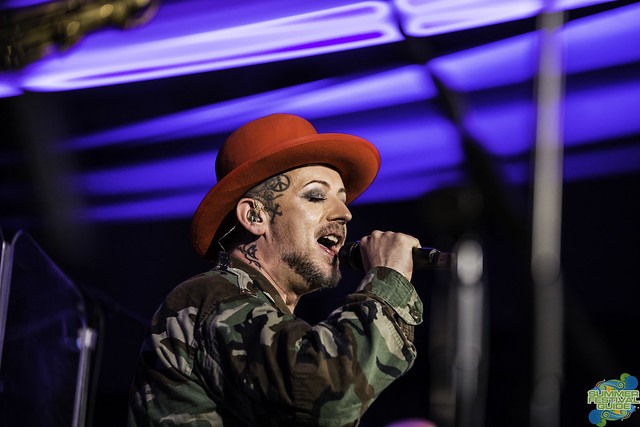 A little clunky at times which is expected at this type of event with little rehearsal time. It felt a little like a one off live T.V. special. Directed by Steve Levine, and presented by Radio 6 DJ Chris Hawkins, the event had everything, interviews between sets and also the recording of a track throughout the night with performers (and the audience acting as a choir) adding overdubs to a new version of Gerry Marsden's 'Ferry Across The Mersey' in Steve Levine's stage side studio.  As far as collaborative one off, one night only live music spectaculars go, this was a massive success.