The valleys are alive… with the sound of music.

Thousands of like-minded music lovers made camp at the foot of Sugarloaf Mountain this weekend to enjoy another inspiring Green Man Festival.

I’ve said it before and I’ll say it again, the greatest festival in the UK has to be Green Man. With beautiful music in equally beautiful surroundings, the atmosphere here is unlike any other.

Last year, my partner and I brought our 7-month-old to what would be our first festival as a family and our first Green Man. Initially worried about what to expect we soon became enchanted with its approach to live music, ethical values and it’s family friendly nature – we vowed to become regulars.

Unfortunately for us we would be begin our weekend on Friday which meant having to miss Thursday’s headliners, The Waterboys but from what I was told, the classic hits from their 80s album Fisherman’s Blues was the perfect end to the first night.

It must’ve been a good one because by the time we had rocked up, pitched the tent and headed into the festival for a pint we discovered the signature Growler Ale was already on the decline, not to worry though as the on-site beer and cider festival meant there was plenty on offer for ale and cider aficionados alike.

With the ground now nicely dried from the previous days down pour and with the sun blazing above the Black Mountains we settled ourselves in front of the Mountain Stage with a couple of cold ones.

The Augustines were just about to begin and the New York three-piece were the perfect way to kick start our weekend. Their crashing sound shook us out of the slump we were feeling after the journey down and when frontman Billy McCarthy announced it was his birthday the whole crowd erupted in an impromptu rendition of Happy Birthday. That Green Man spirit and friendliness reminded me how happy I was to be there. 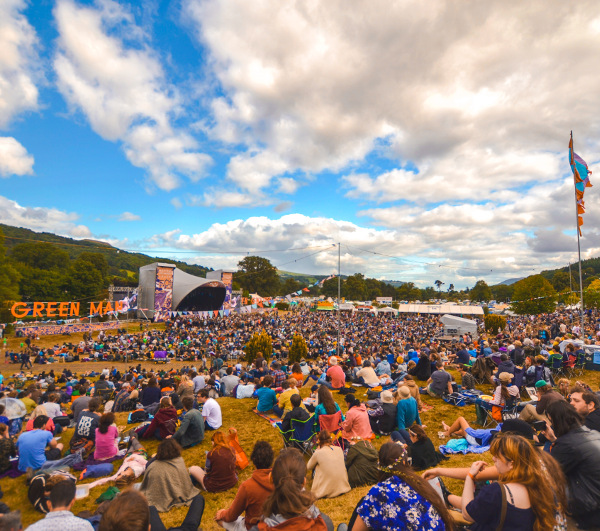 Our toddler had danced himself silly so we thought we’d take a walk to settle him to sleep before heading back to the Mountain Stage for Daughter and headliners, Beirut.

As a parent, other people’s judgment is a constant and irrational worry. In normal life, seeing a baby up after 9pm might invite all manner of tuts and side glances, the beauty of Green Man though is that the experience is as much for children as it is for adults. Wagons padded out and adorned with fairy lights are the transport of choice for tired little legs and are more abundant than drunk teenagers, thankfully. Hiring one of these won’t break the bank either and it ensures headliners don’t have to be missed. Everyone’s happy.

The effort to maintain the ground management to ensure it’s accessibility for wheelchair users, pram pushers and wagon pullers alike is also of noteworthy importance. The whole arena is relatively flat and is a pleasure to walk around, and as night falls, the trees light up and the place is framed with fairy lights, it truly is a magical place.

Back at the Mountain Stage, Daughter provided a stunning set playing tracks from their debut album If You Leave and EP, The Wild Youth. The ethereal voice of Elena Tonra was an early highlight. Perhaps one of the most anticipated acts of the weekend, they certainty didn’t disappoint. Hearing the hauntingly beautiful, Still come to life was earth moving and you couldn’t help but get drawn in by the raw emotion of it all. 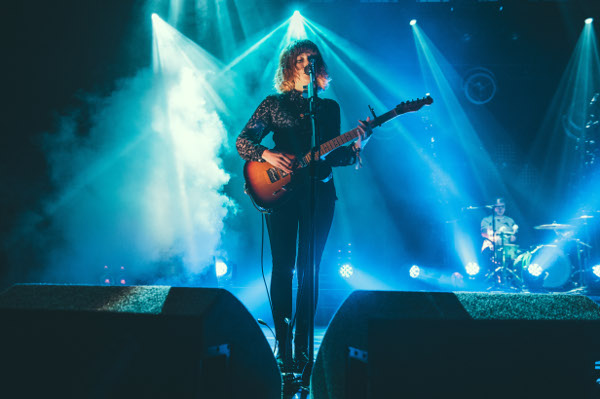 Nicely mellowed out, we struggled to fight back the desire to head back to the tent, we knew we’d made the right decision however when Beirut burst on stage.

The rapturous trumpets blew out the need to sleep and the hit filled set soon had us all on our feet. Frontman Zach Condon seemed genuinely thrilled to be given the top spot and they were clearly the perfect choice to end Friday’s festivities. 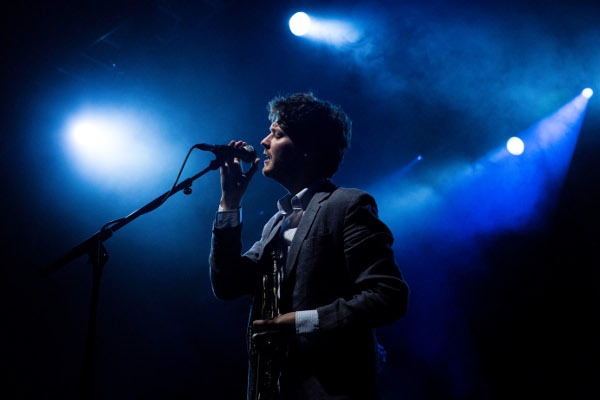 Unzipping our tent the following morning and watching the mist rise over the Black Mountains was something special indeed, and as the clouds parted across the valley all that was left were blue skies.

After breakfast we headed over to the Little Folk Enclosure to catch The Flying Seagulls. We saw this merry band of performers last year and were fascinated by their mix of energy and madness, perhaps more so than some of the kids!

Our toddler eventually pulled his parents away from the Seagulls and took us over to I See Magical Creatures, a whimsical band of characters who encourage creativity and participation through arts and crafts. We stayed and painted a rhinoceros and then as you are encouraged to do, we hid him near a tree for someone to find. This was an adorable activity that allowed our imaginations to run free and kept our boy enthralled for a good while.

After wandering though Einstein’s Garden and chatting to some very clever and creative minds there, we decided to head over to the Far Out tent to catch reformed Swansea band, The Pooh Sticks. Their inoffensive indie had us bopping along and we hung out after to catch up-and-coming purveyors of modernist pop, Woman’s Hour.

After bumping into friends and family with their children we pitched up near the helter skelter for a bite to eat and planned our next musical move.

We hung around the Far Out tent long enough to catch Fat White Family, eager to see what all the fuss was about with these young lads.

After reading about the madness from some of their earlier gigs I was keen to see what extrovert frontman Lias Saoudi would bring. Shirtless and repeatedly off stage and in amongst it, the punk-ish behavior somehow wasn’t enough to distract from how musically brilliant these guys are. Yes, they’re over the top but that’s what makes them so addictive – it was certainly up there with one of the best performances of the weekend.

We decided to forego I Break Horses in favor of a pit stop back at the tent before heading back down to the Mountain Stage for the evening.

We caught the tail end of The War On Drugs, and as we approached I couldn’t help but notice how packed the crowd was. Lead singer Adam Granduciel belted out songs from new album Lost in the Dream and had everyone warmed up for Mercury Rev. 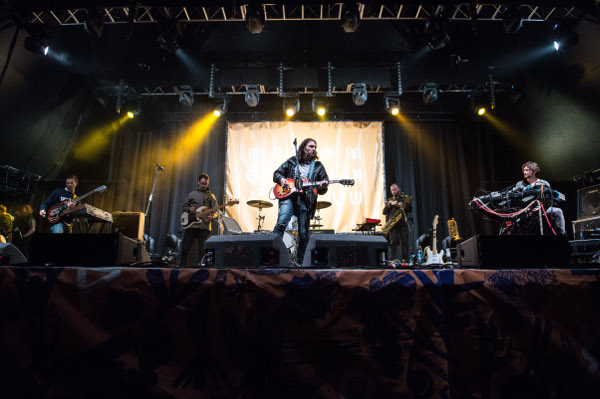 Playing their classic album, Deserters Song’s in its entirety, headliners Mercury Rev were phenomenal. Considered one of the highest rated albums of the year when it was released in 1998, it truly was a joy to hear live.

Sunday started much the same as Saturday. We spent far too much time singing along with the Flying Seagulls but managed to pull ourselves away when we heard the band begin for No Fit State Circus who were on site showcasing some of their amazing skills and acrobatics.

Having seen the company perform Bianco last year I was hoping to see a little more from No Fit State, their blend of carnival vaudeville circus techniques were fun but unfortunately I wasn’t blown away. It was worth hanging around just to listen to their band though who were stomping out all manner of Parisian infused cabaret music which really got the audience going.

Sunday was mostly a day for lounging and exploring. We wearily wandered around the Nature Nurture area, discovering the joys of bush craft and wished we’d had the foresight to book into the spa before deciding to push on through and head to the Babbling Tongues tent.

We were hoping to catch Howard Marks who was due to give a talk on Dylan Thomas to tie in with the centenary celebrations but unfortunately this was cancelled. However, we were able to chat all things Dylan Thomas with aficionado and number one fan, Jeff Towns who was on-site with his mobile bookstore, Dylan’s Book’s.

After a good chinwag we decided to head back to the tent to feed the kid and layer up for the evening.

We made our way to the Mountain Stage later that evening and settled in to catch First Aid Kit.

“Hello, we’re two Swedish sisters,” were the first words from beautiful songstresses Johanna and Klara Söderberg and I overheard someone suggest the large crowd was probably made up of men, eager to catch a glimpse of the stunning pair rather than take in the music.

Whatever your reason for being there, their beauty was matched by equally gorgeous vocals. Playing tracks from their new album Stay Gold, and peppered with earlier tracks like Wolf, their set had something for old and new fans.

Bringing the festivities to a close were folk legends, Neutral Milk Hotel who returned to the stage bringing with them a newfound vitality and spirit. After disbanding in 1998, they returned to touring last year and the reception they’ve received every since has been huge.

After having far too much fun we couldn’t bare to stay up to watch the Green Man burn, the annual flaming full-stop that marks the end of the weekend would mean it really is all over for another year.

With such an eclectic programme of acts each year it is clear to see why thousands flock here. The breathtaking backdrop is the perfect location to what is fast becoming one of the most highly anticipated festivals of the summer. Only 360 odd days until the next one!