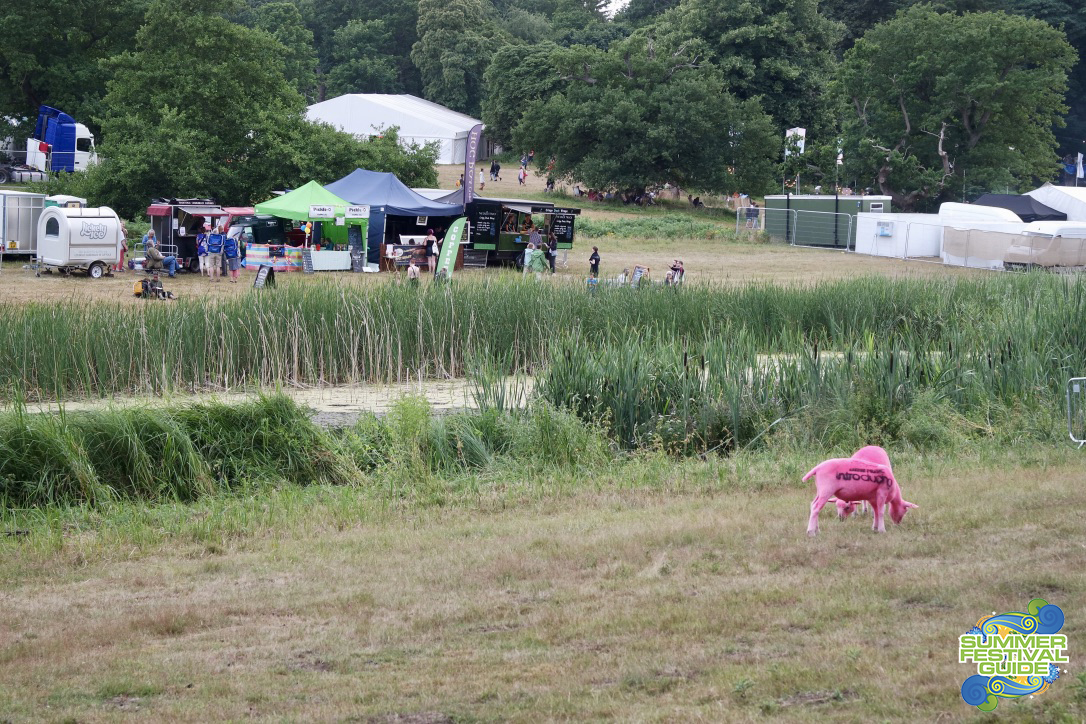 Based on the great line up and long list of stages I had high hopes for my first Latitude. It took me a day or so to get there but by the end of the weekend I had definitely fallen for the festival. Despite what appeared to be quite a specific audience of ‘white, middle class, Waitrose shoppers’, it turned out to be a festival that offers something for everyone.

The festival site is situated on either side of a rather picturesque lake and then continues to spread into the woods on both sides. It is known for its wide variety of stages: the main music stages are the Oblisk Arena and BBC Music Stage; followed by a wide number of smaller music stages featuring mostly up and coming musicians; the Comedy Stage is close behind the main stage in popularity, with a strong line up of well known names such as Dara OBriain, Joel Dommett and Katherine Ryan; in addition there is a Theatre; the Dance on the Waterfront stage, which features a variety of dance and otherwise indefinable acts; plus many more stages featuring art, politics, and speakers.

One of the first things that stood out when exploring the site was the small size of the audience area in front of the Obelisk Arena. It is contained by high-rise arena style seating placed around the outside – quite practical but also a reminder of what kind of audience you are watching alongside. However for the headliners of the evening, The 1975, neither the audience area nor the seats were even close to full. This was a trend that continued over the weekend; it was a nice change not having to push through masses of people to get anywhere, but also slightly disappointing as a good crowd can make a big difference to a live performance. The 1975’s lead singer, Matt Healy spent the performance drinking and smoking but his odd brand of charisma was in full force, and he charmed the audience with his chat between songs about spreading unity and love.

Mumford and Son’s Gentlemen of the Road label (GOTR) curated Saturday’s line up, and they also headlined the Obelisk Arena alongside Baaba Maal later. The line up featured lots of names that will be familiar if you are a fan of Mumford’s style of folk/acoustic sounds. This was to be a day full of music in my opinion – the main draw of the festival for me – and the day was spent switching between stages to catch as much music as possible.

Opening the Obelisk Arena were The Very Best, the band is from London and Malawi, and they supported Mumford and Sons on tour in Africa last year. Their sound was unique and enjoyable despite being a bit unpolished; Warm Heart of Africa was the highlight of the set.

The main stage line up for the rest of day just got better, with Lucy Rose putting in a stunning performance, followed by Milky Chance who were an unexpected highlight for me. They were joined on stage by an incredible harmonica player who would have made the set were it not for the star quality and strong performance brought by lead singer Clemens Rehbein. Glass Animals followed, and clearly had many supporters in the crowd as pineapples (their unofficial motif) started to pop up everywhere. One fan ate almost an entire pineapple throughout the set. They are worthy of the quirky adoration and have proved themselves a great addition to any festival line up.

The most anticipated set of the weekend for me was next on the BBC Music stage, the second biggest stage at the festival. A Blaze of Feather have only recently launched themselves on to the music scene and this was their first UK festival appearance. Despite featuring the widely adored Ben Howard, the band has retained a high level of mystery, which would explain the half empty tent (alongside the unfortunate scheduling clash with Two Door Cinema Club). The music was haunting and beautiful, and the clear connection between the band members made the skillful performance so much more special.

The Alcove Stage, run by DIY Music, is also worth a mention for its excellent Saturday line up of musicians on the peripherals of success. Flyte, Mosa Wilde, Outlya and Jade Bird are all ones to watch out for – have a listen if you get the chance.

The night was brought to a close with Mumford and Sons sharing their headline slot with Baaba Maal. The set was a classic Mumford and Sons set – high-energy folk music with plenty of jumping and some wonderful banjo playing. If they are not really your thing then the addition of Baaba Maal and Maggie Rogers should have made up for that. Both brought powerful vocals that helped to raise the set up from average to great.

The evening ended with a packed out Music and Film Arena for Jaguar Skillz, and the discovery of Parcels on the Solas Stage. They have previously supported Two Door Cinema Club and their funky sounds were the perfect thing to get the audience dancing before winding down for the night.

Sunday is typically a chilled day at Latitude, which was just as well, having spent the previous day trying to see as much of the GOTR line up as possible. There was some great music on the Saturday, but I felt like I had yet to discover the magic of the festival that I was sure was in there somewhere.

The Solas stage turned out to be a highlight of the day; tucked away in the woods right behind the pink sheep grazing on the grass around the big-mirrored Latitude sign. Hein Cooper was an early discovery of the day who held his audience captive with his singer-songwriter vibe that combined with electronics and pedals to build a unique and effective sound.

Leo Stannard was the other Sunday Solas highlight. He had a backing band with him, and broke from the expected set formula to play an instrumental piece on his own.

The Alcove Stage discovery of the day was Joe Fox, apparently still almost entirely unknown, but with big potential. His new single ‘What’s the Word’ is worth checking out.

In the afternoon I wandered through more woods to where some other stages were located. I caught Adwaith at the BBC Introducing stage while sinking into one of the comfy sofas set out in front of the stage. They are a feisty trio of girls who were suitably enjoyable to listen to, especially from the luxury of my squishy leather sofa.

Fleet Foxes and Fatboy Slim provided the evenings entertainment on the two main stages. They were scheduled to clash, which wasn’t the case with Saturday headliners but seems to make sense considering how different their expected audiences are. The Fleet Foxes set was slow moving and not exactly the stuff of legendary Sunday night headline slots, despite being musically lovely. Fatboy Slim was the complete opposite, with a completely full audience in the BBC tent, all jumping, dancing and singing along for the entirety of the set.

Following such excitement the only place to be for the last few hours of the festival was at the Sunrise Arena After Dark, hidden about as far away in the woods as you can get, the crowds still all managed to make their way for Trevor Nelson’s smash hit DJ set. It was a great fun close to the weekend, and not what was expected upon spotting a pop-up Waitrose by the main stage on the first day of the festival. It appears that Latitude have managed to hit the nail on the head once again when it comes to their signature variety of music and arts, perfectly presented across their beautiful site.