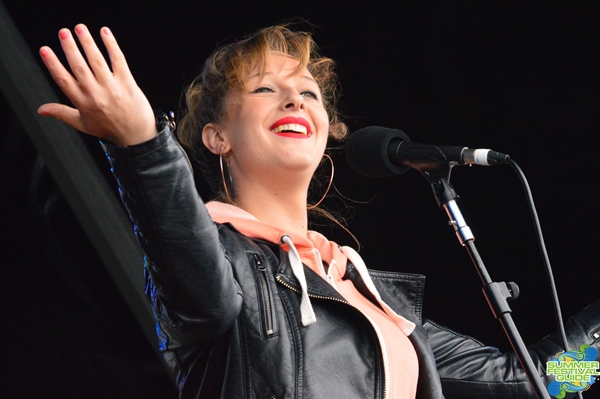 Strong wind; rain; hundreds of party people who were wearing layers of clothing to keep warm but were raring to go and dance the day away; that pretty much sums up Saturday of Beach Break Live. It started off with patchy spells of rain that had people running back to their tents to grab ponchos and wellington boots. The weather really hit you though the moment you arrived at Fistral Beach, everyone was styling a very nice up do of wind swept hair and soggy clothing. As long as you could withstand the wind and actually made it to the main stage it wasn’t too bad; everyone huddled together to form a group near the front of the stage to keep warm; I guess the weather brings people together at times.

Due to the weather many people didn’t really want to leave their tents meaning there wasn’t anyone at the main stage until Lazy Habits came on. Now I’ve been told about these guys before, their brass section was praised by another band that I had been talking to so there was no way I was missing out on them. I quite liked the way they began; you had the lead singer performing as best he could whilst the rest of the band stood waiting; I even managed to glimpse a cheeky smile from the trumpet player as he tried to keep himself composed. Their upbeat sounds were perfectly composed together with the brass line, which gave them a unique performance from the rest of the weekend so far.

Next up were Submotion Orchestra, there was so much buzz around this band and I have to admit I was not let down. What I loved the most about them is that they wanted to be there and you could tell, they all had smiles on their faces even though they had strong winds and rain hitting them. Following were AlunaGeorge, now I first thought it was the entire band or just the singer but I was later informed that it was two people. You had Aluna, the main singer, and George the keyboardist; this is something I would have never guessed. Yes they put on a decent set, they could have been more energetic but I guess they were freezing cold so I will give them that. The downfall was that George just seemed like he didn’t want to be there and left the stage presence to Aluna, I guess that’s what happens when you are just put in the background to play. Despite all this the crowd was dancing and screaming the lyrics along to the songs, they all seemed to be having a great time, which means they’ve done their job correctly.

We finally had Jake Bugg on stage; with his rise to fame from the song Lighting Bolt it was understandable that he had the largest crowd of the weekend. Everyone was there to see this one guy play guitar on the stage and hear the songs they love and know so much. After seeing him perform at a festival called Blissfields (Winchester, Hampshire) last year to 10 people I felt like a proud guidance councillor to see him perform in front of hundreds, maybe even thousands. Unfortunately many people left disappointed because he doesn’t have that stage presence that you need to entertain a large amount of people, he just provided his refreshing voice and country sounds. Saying that he does what he does well and if people want to see him good on you, he is very good live it’s just a shame he doesn’t interact with the crowd that much. 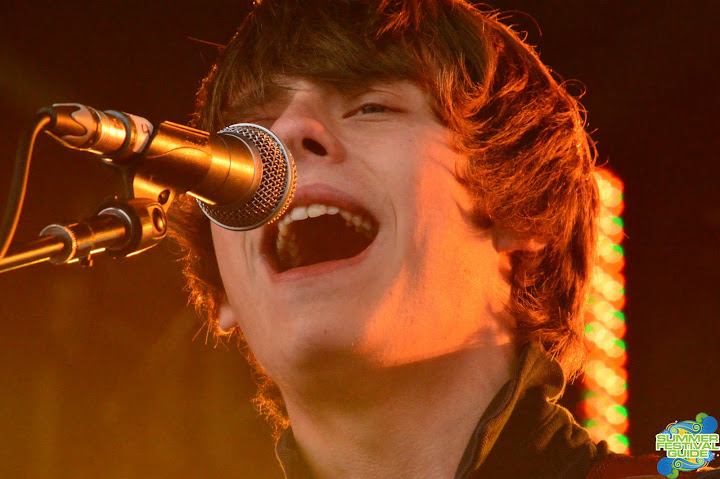 After a long day at the beach I decided tonight was the night to head out and see what was going on around the town. There was something going on every where, you would step outside the pub/club you were just in and there would be another band/DJ playing across the road; it was truly amazing. It meant that everywhere you went there would be people enjoying themselves and spreading a good vibe, even some celebrities (who will remain unnamed) were spotted around the town getting involved. Overall it was a genuinely good day, despite the winds, and it definitely was full of surprises, entertainment and soggy clothing.

Thursday provided the festival with an opening night that was more of a fizzle than a bang. Transport problems, computer issues meaning waiting around two hours to get a wristband, and rain all contributed to that festival nightmare that every festivalgoer has to experience. Although you could hear people chatting away and having a good time if you ever left the tent all you would find was a deserted mound of tents surrounded by mud. Friday however definitely made up for anything that may have gone wrong the night before.

Jumping on the bus with a load of hung-over, tired students for the 20 minute journey into town where a 10 minute walk was waiting for us to get to Fistral beach.  It was most definitely worth it when you talk those last few steps before you see the stage and the view that surrounds it, you start to hear the beat of the drums and you know it’s going to be a good day.  The weather however teased us into thinking it was going to be terrible but the moment Gentleman’s Dub Club jumped on stage the sun came out and it no longer felt like you were just on a beach in Cornwall.

Stand out act of the day had to be Cuban Brothers, recommended for those who like to have a good laugh. The first thing the lead singer did was jump straight out into the crowd; the sea of people parted to form a perfect circle around him as he continued with the song. He danced with as many people as he could, people were jumping on his back, and I believe he got hit in the head with several beach balls and yet never missed a beat. If you search them up and read the bio of their website the first thing you read are the words “They will make you laugh, sing along, cry with joy, shit your pants and shake your booty” and I don’t think I could sum them up any better. 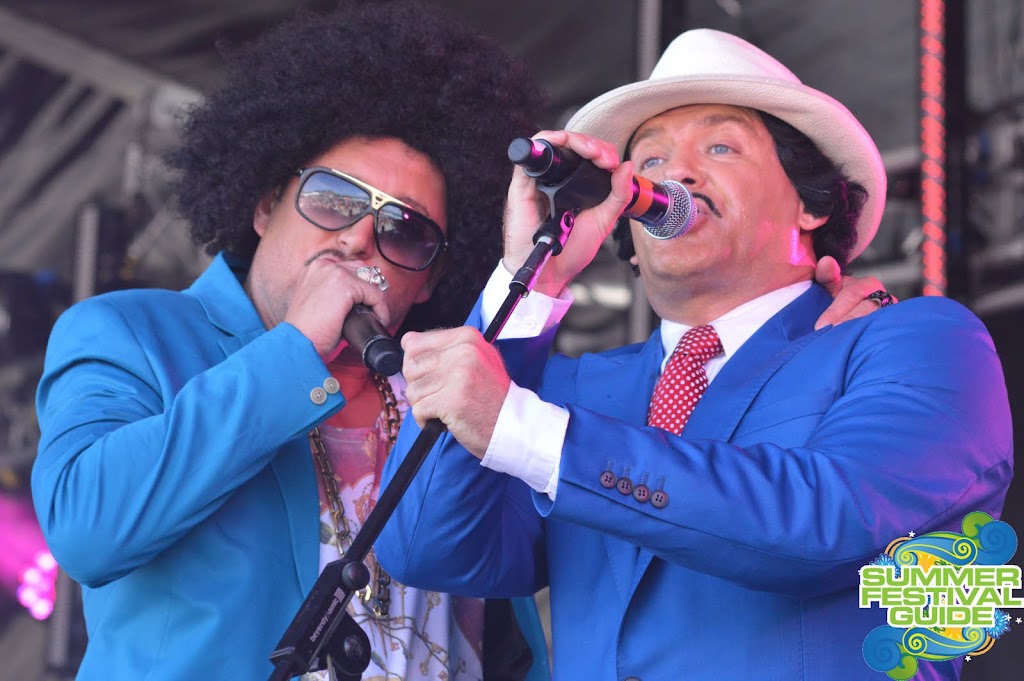 Following on from the Cuban Brothers were Foreign Beggars who weren’t really my cup of tea but they definitely put on a show; providing beats and an overall vibe that their fan base would love. Bouncing around on stage making sure all of the crowd were involved, getting people to put their hands up, sing along and even managed to chuck in a couple of jokes now and then. After Foreign Beggars was Devlin.  His grime collective teased the crowd as they came on one by one over a long period of time; I’m not sure whether this is their usual plan of action but it definitely frustrated the crowd. Once they were all on they did put on a good show; much to the relief of the security guards who really didn’t want to have to control a crowd of hundreds of people. Shock of the day came last; the entirety of the press pit was shocked as the man we all thought was getting the stage ready was actually David Rodigan himself. On came the remixes of original reggae which was an incredibly way to end the night at Fistral beach; they were pieces of music that everyone could admire and have a casual groove to. The crowd that was still standing, even though the sun had gone away and the weather had started to take a turn for the worst, definitely enjoyed David Rodigan and left leaving positive and still dancing. 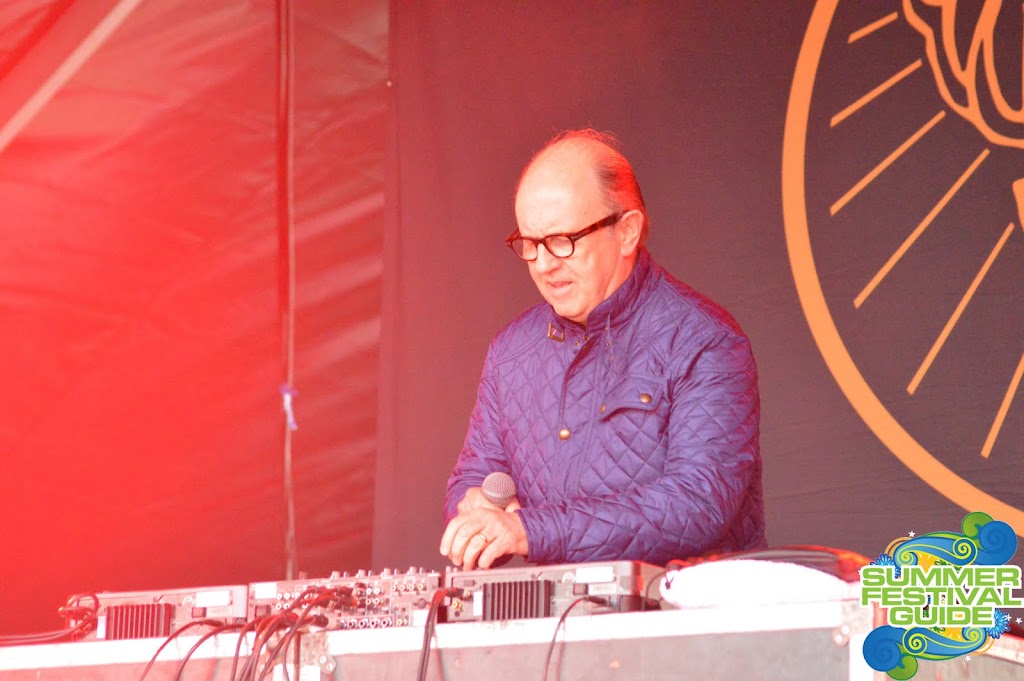 The overall vibe of the day was perfect, you had people walking around in their swim wear with flip flops on as they paraded on the beach section of the festival. There were people dressed up as clowns, pirates, and many other strange combinations of costumes who all provided a source of energy and fun when no one was on stage. To sum up the day in general I would have to say it was a day to remember, and if the rest of the weekend is like this I recommend buying a ticket for 2014.